All Collections
Feedback
Using Feedback for 360s (Feedback for Others)
360 Feedback: Setup and Launch

Using Feedback to launch a 360 for your teams

Written by 7Geese
Updated over a week ago

A 360-style feedback workflow, which provides a simple process for collecting, curating, and sharing peer feedback. This workflow can be started by admins on behalf of managers, or by managers directly if they want to run a 360-feedback survey for their direct reports.

However, the feedback report can only be curated and shared by the person who created it. If admins would rather managers curate the report and share it, managers should be the ones initiating the 'Request feedback for others'.

In order to get the most out of your 360 feedback, we recommend creating a specific template for this process. If you have already created a 360 feedback template, you can get right to set up the 360 feedback. If not, we recommend keeping the following in mind:

Setting up a 360 Feedback

You will be taken to the feedback builder:

Choose the distinct name for your 360 process. Describe its purpose.

The recipient is the subject of the 360 feedback, who will receive the final 360 report. For each recipient, you can choose who will be providing feedback to the recipient (responders).

Select a template. All templates from the Feedback template library will be preloaded. Pick the appropriate template from the list. A template must be created as you can’t create a 360 feedback from scratch. 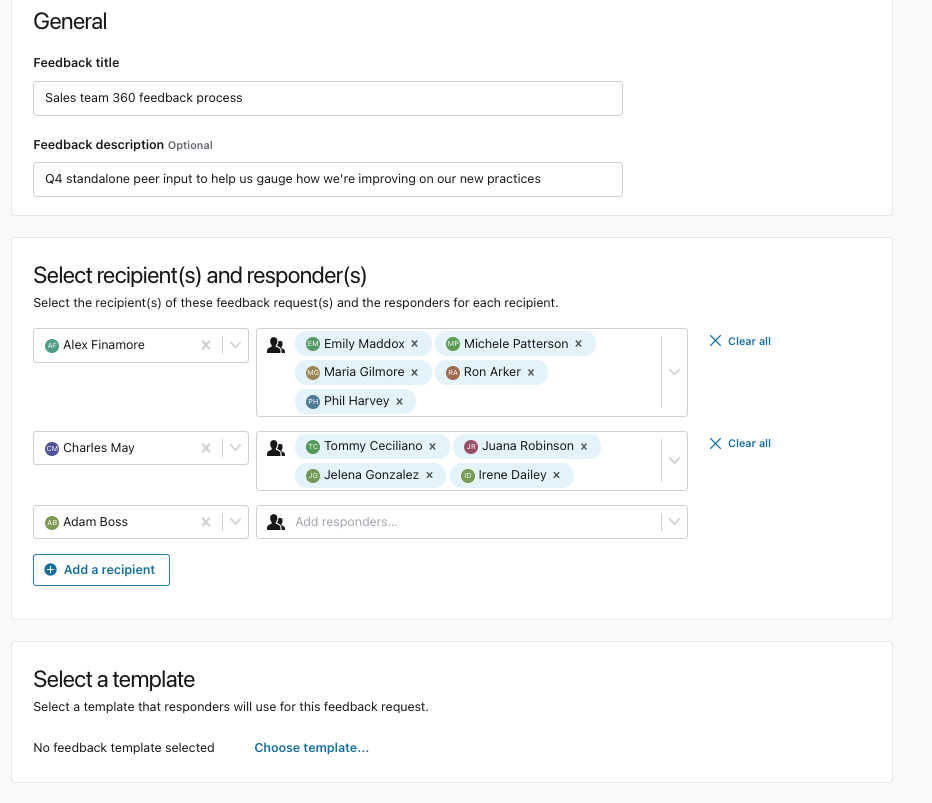 Response visibility settings (if not locked by the template)

Select the response anonymity settings (if not locked by the template)

Note: While setting up, the information you enter is automatically saved in case the page is accidentally closed or you accidentally go to another section of the platform.

If you decide not to send the 360 feedback survey immediately, or have accidentally gone to another section of the platform, you can easily find your drafts at the bottom of the Feedback for Coworkers page.

Simply click on the draft you’d like to continue editing, and it will take you back to the feedback builder.

Responding to a 360-style feedback

Just like responding to a general feedback survey, responders will answer 360-style surveys the same way.

Did this answer your question?